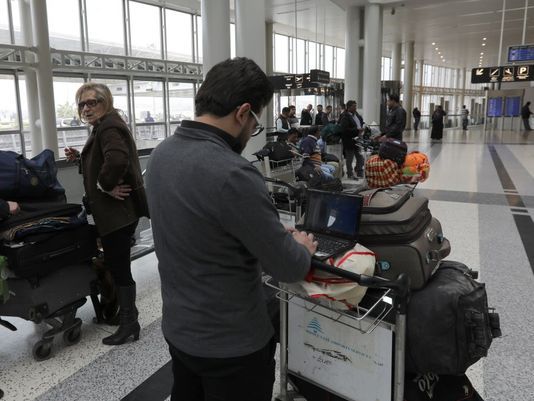 Corrections & Clarifications: A previous version of this story didn’t specify that six countries were covered by the travel ban.

President Trump’s temporary travel ban and an inhospitable political climate could punch an $18 billion hole in U.S. tourism by international visitors over the next two years, projections by travel analysts show.

“The U.S. has put an unwelcome mat at our front door,” said Henry Harteveldt, president of Atmosphere Research Group, which conducts travel research.

About 4.3 million fewer international travelers will visit the U.S. this year because of the bans, a revenue loss of $7.4 billion, according to Tourism Economics of Wayne, Pa. Another 6.3 million visitors and $10.8 billion that they would have spent will be lost in 2018, it estimated.

“‘America first’ rhetoric, which was pronounced during the campaign and Trump’s inauguration speech, is finding consistent expression in policy,” said Adam Sacks, president of Tourism Economics. “On multiple fronts — diplomacy, trade, border control, visa policy — international markets are receiving a message that America is no longer a welcoming destination.”

The expected decline in international tourism marks a reversal from recent years, when foreign visitors rose to 77 million in 2016, from 54 million in 2009, said Roger Dow, CEO of the U.S. Travel Association, which represents airlines, hotels and destination resorts. He said each visitor spends an average of $4,300 over 18 days.

“We’re hearing concern,” Dow said. “Our message to the Trump administration is real simple: ‘We’re real good at America being closed for terrorism and open for business.’ What we need them to do is say that.”

After the second ban was blocked, Trump told a Nashville audience March 15 that he would appeal all the way to the Supreme Court because the president is empowered to prevent the entry of foreigners who might pose a threat to the country. He campaigned to beef up travel security and build a wall along the border with Mexico to prevent criminals, drug dealers and terrorists from entering the U.S.

The administration wants to enact enhanced vetting procedures for all foreign visitors that will remain in place even after a temporary travel ban is lifted. That could further discourage foreign tourists as well as people coming to the United States for business and school.

One million international students spend $32 billion a year, according to Terry Hartle, a senior vice president for the American Council on Education. Only about 15,000 students are affected by the travel ban, but Trump’s policies could discourage students from other countries with options to study in the United Kingdom, Canada and Australia, Hartle said.

“It’s an undesirable self-inflicted wound,” Hartle said. “Anecdotal evidence shows that many schools are seeing declines in international applications for the coming year, and other countries are seeing increases.”

Business is worried as well.  A group of 97 Silicon Valley companies — led by Apple, Microsoft, Google, Facebook, Twitter, Yelp and Netflix — argued in one of the lawsuits challenging Trump’s travel ban that the order would make it more difficult to “attract talent, business and investment to the United States.”

Other examples of a negative impact from the travel ban:

The Airlines Reporting Corp. found a relatively low increase of 0.9% in inbound travel to the U.S. during the first seven weeks of this year, compared to larger gains in each of the previous two years. “This is not a particularly encouraging statistic for the USA,” said Olivier Jager, CEO of ForwardKeys, which found travel flat from Jan. 28 through March 25.

•  NYC & Co., the tourism and marketing group for the nation’s largest city, forecast 300,000 fewer international visitors this year compared to last year, a loss of $600 million in direct spending and $900 million in rippling economic effects. The drop would be the first since the 2008-09 recession. The group plans to spend $3 million to advertise in the United Kingdom, Mexico, Germany and Spain, to reinforce that “we’re a place that welcomes everybody,” said Deputy Mayor Alicia Glen.

• Over the next three years, Los Angeles could lose 800,000 international visitors and $736 million in direct spending because of the perception that visitors aren’t welcome, according to Ernest Wooden Jr., CEO for Discover Los Angeles. The tourism group will launch an international advertising campaign within four weeks to “roll out the red carpet” and underscore that the diverse community “invites and welcomes visitors from all corners of the globe,” Wooden said.

• In the week after the first travel ban, business travelers canceled $185 million in bookings because of uncertainty over traveler confidence, according to the Global Business Travel Association, which represents 7,000 travel managers. A survey found nearly half of European travel professionals and 31% of their U.S. counterparts expected their companies to reduce travel during the next three months, the group said.

• Marriott International had a 25% to 30% decline in U.S. bookings in February from the Middle East and a 10% decline from Mexico, Marriott CEO Arne Sorenson said during a March 21 earnings call. A handful of groups chose to hold meetings outside the U.S. because of concerns that attendees would face travel difficulties, he said.

Travel experts say it’s too soon to determine the impact of the March 21 ban against travelers bringing electronics larger than cellphones into the cabins of non-stop flights from 10 airports in the Middle East and Africa. Business travelers might simply take different routes to avoid the targeted airlines and airports

“With new regulations on electronics and tighter visa issuance policies recently announced, global travel markets will take further cues that the U.S. is not as welcoming as it once was,” said Sacks of Tourism Economics. “It will require creative and targeted marketing to overcome these challenges.”

U.S. violence against foreigners also could discourage travel, such as when two men from India were shot at a bar in a Kansas City suburb on Feb. 22. The two were students and engineers at GPS-maker Garmin. Srinivas Kuchibhotla, 32, was killed and Alok Madasani was wounded when Adam Purinton allegedly opened fire, saying “get out of my country,” according to witnesses.

Even before Trump issued his travel ban, concern about his election dampened foreign interest in visiting the U.S., travel analyst Harteveldt said. A December survey of travelers in 15 countries found at least 20% of respondents in each country had canceled trips or were less likely to visit the U.S. in 2017, he said. “There is a sense that the U.S. simply does not want international visitors from certain countries.

Greeley Koch, executive director of the Association of Corporate Travel Executives, said 39% of the 260 executives who responded by Jan. 30 to his survey after the first ban was announced said they would significantly reduce their travel. Another survey after the revised ban found 21% of respondents would reconsider doing business in the U.S., Koch said.

“It could be a snowball from there because people get frustrated,” Koch said. “They think the U.S. is anti-busine.