Breitbart News has announced that Steve Bannon is stepping down from his position as executive chairman of the conservative-leaning news organization. Rob Smith (@robsmithonline) has all the details! Buzz60

Steve Bannon — the controversial former White House adviser scolded by the president for his explosive comments in a tell-all book about the Trump administration — stepped down Tuesday from his top post at Breitbart News, the website that helped fuel Donald Trump’s presidential campaign.

“I’m proud of what the Breitbart team has accomplished in so short a period of time in building out a world-class news platform,” Bannon, who was the chair of the far-right media organization, said in a statement.

The announcement comes just days after the release of Fire and Fury, a tell-all by Michael Wolff, in which Bannon called actions by President Trump’s son “treasonous.”

Bannon’s comments about Donald Trump Jr.’s 2016 meeting with a Russian lawyer were published last week ahead of the book’s release, leading the president to issue an extraordinary and scathing statement about his former adviser.

“Steve Bannon has nothing to do with me or my Presidency,” Trump said last week of his former chief strategist. “When he was fired, he not only lost his job, he lost his mind.”

Since the public break, Bannon has tried to atone for his comments. Over the weekend, he said he intended to blame ex-Trump campaign manager Paul Manafort, not Trump Jr., for the meeting. 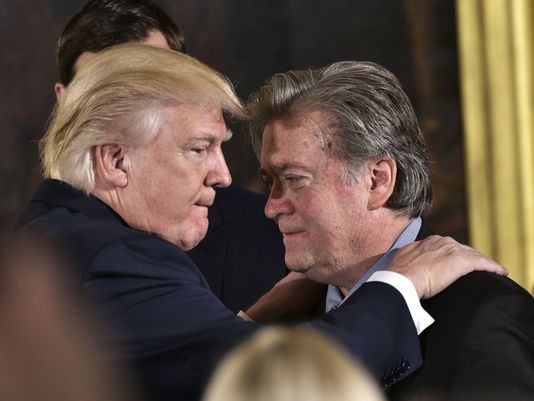 Bannon also suggested to Wolff that President Trump likely met the Russian visitors when they were at Trump Tower, despite Trump’s denials that he even knew about the meeting.

“The chance that Don Jr. did not walk these jumos up this father’s office on the twenty-sixth floor is zero,” Bannon said, per the book.

Throughout the book, Bannon is a key voice in discussing the developments of the Trump administration, and often appears at odds with the Trump family — in particular, Kushner and his wife, Ivanka Trump.

After being fired by Trump last summer, Bannon returned to Breitbart, the ultraconservative news site he had previously led.

Following the release of Bannon’s comments in the Wolff book, Rebekah Mercer, one of the key funders of Breitbart and other Bannon political enterprises, announced she would no longer fund Bannon projects.

The normally press-shy Mercer issued a statement Thursday, saying “My family and I have not communicated with Steve Bannon in many months and have provided no financial support to his political agenda, nor do we support his recent actions and statements.”

Bannon’s ouster from Breitbart is just the latest chapter in the rise and fall of the unlikely Washington character. Bannon, a founding member of the Breitbart News board, was named the organization’s executive chairman after the death of Andrew Breitbart in 2012. Under Bannon, the organization became a far-right tribune and a leading voice in the pro-Trump populist movement.

He joined the Trump campaign in August 2016 as its chairman, and even Trump credited Bannon with helping him win the election. He then was elevated to Trump’s chief strategist at the White House, where he reported directly to the president, essentially giving him equal footing with then-chief of staff Reince Priebus and Trump’s son-in-law, Jared Kushner (and later, Trump’s daughter, Ivanka).

But by August 2017, just a year after he had joined the campaign, he was fired from the administration, after repeated clashes with other senior officials.

Since leaving the administration, Bannon had shifted his focus to a crusade against the Republican establishment by championing “outsider” candidates in upcoming elections. In the Alabama Senate special election, he backed Roy Moore, who triumphed over sitting Sen. Luther Strange in the Republican primary — only to lose to Democrat Doug Jones months later, after allegations surfaced that Moore had engaged in sexual misconduct with teenage girls when he was in his 30s.

After his Fire and Fury comments were published last week, the anti-establishment candidates Bannon has backed appeared to distance themselves from him, including former New York congressman Michael Grimm and Arizona Republican Kelli Ward.

Amy Tarkanian, the wife of pro-Trump Nevada Senate candidate Danny Tarkanian, told USA TODAY Tuesday that Trump is their first priority, but they would take Bannon’s support whether he was with Breitbart or not. Danny Tarkanian, who is running against sitting GOP Sen. Dean Heller, is one of the “outsider” candidates who met with Bannon this year.

How Bannon handled interviews for the Wolff book is “his battle not ours,” Amy Tarkanian said.

“It’s unfortunate, but anyone who wants to support Danny I’m sure we would be happy to have,” she said.