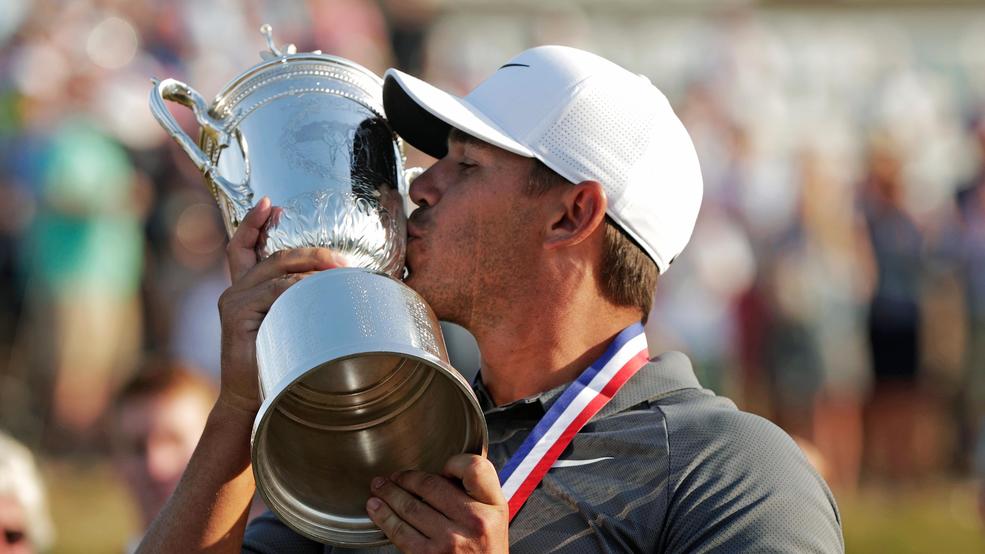 Brooks Koepka told anyone within earshot this week that no one was more confident than he was when the field of 156 arrived at Shinnecock Hills Golf Club for the 118th edition of the U.S. Open

Koepka became the seventh to win the national championship in back-to-back years with a final-round 2-under-par 68 Sunday to hold off Tommy Fleetwood by one shot. Koepka, who won his first major in the 2017 U.S. Open at wide-open Erin Hills in Wisconsin, shot rounds of 75-66-72-68 to finish at 1 over.

One year after Koepka overpowered the wide fairways of Erin Hills in a U.S. Open remembered for low scoring, he navigated his way through the brutal conditions of Shinnecock Hills and closed with a 2-under 68 to become the first repeat champion in 29 years.

Curtis Strange, the last player to go back-to-back in this major, watched the entire final round Sunday as the Fox Sports reporter on the ground, and they shared a brief hug off the 18th green after Koepka tapped in for bogey and a one-shot victory.

Koepka captured his second major Sunday. It would not have been possible without his 72 on Saturday in conditions so severe the last 45 players to tee off in the third round didn’t break par. The USGA conceded the course was over the top and pledged to get it right for the final round.

The initial challenge was his own doing, a 75 on Thursday with two bogeys and two double-bogeys. He rallied to a 66 on Friday, and as the course and conditions took hold of this tournament on Saturday afternoon, Koepka was impacted just like the rest of the field. He carded three bogeys in his final seven holes of the day to finish with a 72, but those four pars he had to grind out in the same stretch left him in tie for first place and in the mix to win on Sunday.

Round 4 was all about execution. Koepka was all over the pins early in the round, with birdies on three of the first five holes. When the wind picked up in the afternoon, he did as good a job scrambling as anyone on the course. He was lights out on the greens, burying tough putts from 5-10 feet when his playing partner couldn’t buy a birdie putt.

Koepka, 28, who joined Curtis Strange (1988-89) and Ben Hogan (1950-51) as the only players to win consecutive Opens since the end of WWII, was on point with all facets of his game, tapping into his mental state, eye-opening power and imperative short game with equal reward.

One of four players to share the 54-hole lead, Koepka broke from the pack with three birdies in his first five holes and added a crucial four-footer for birdie on the 16th to keep his rivals at bay. Just as important for Koepka, who never gave up the outright lead after the ninth hole, were par saves from six feet on 12 and eight feet on 14 and a bogey save from 15 feet on 11, when he was hoping to take a double-bogey 5 on the par-3 hole.

Koepka, with a performance and a demeanor reminiscent of Retief Goosen winning at Shinnecock Hills in 2004, began the back nine with three pivotal putts — one for birdie, one for bogey, one for par.

He seized control with a wedge to 3 1/2 feet for birdie on the par-5 16th for a two-shot lead, and he never flinched until it no longer mattered. Koepka pulled his approach to the 18th off the grandstand, pitched on to about 12 feet and two-putted for a bogey.

He finished at 1-over 281, 13 shots higher than his winning score at Erin Hills last year. It was the first time since 2013 at Merion that no one broke par in the U.S. Open.

Dustin Johnson, part of the four-way tie for the lead to start the final round, had an even-par 70 to finish alone in third. Masters champion Patrick Reed, who briefly shared the lead with five birdies through seven holes, stumbled on the back and had a 68 to finish fourth